Get fresh music recommendations delivered to your inbox every Friday.

SONGS FROM THE FEVER SHIP

by Eamonn Dowd & The Racketeers featuring Eamon Carr from Horslips 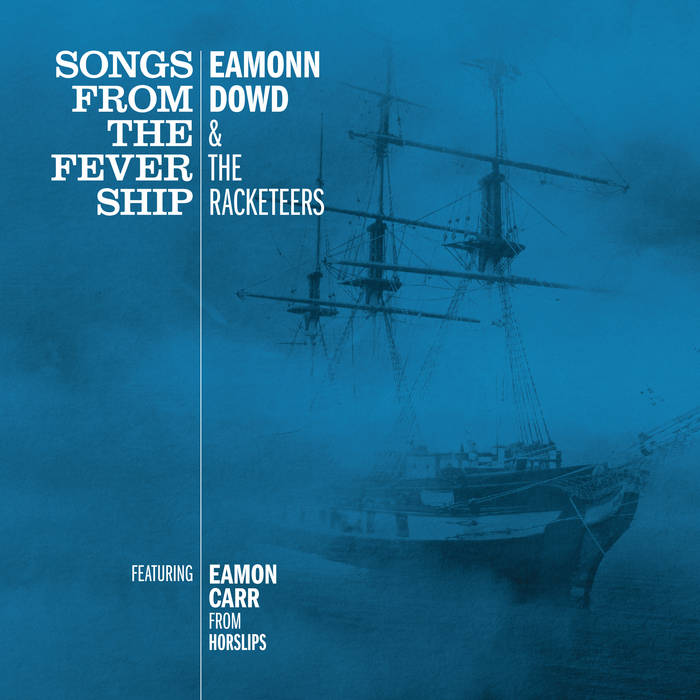 A lyrical cargo of history, migration and circumnavigational melody!

Nordic-based Irish rocker Eamonn Dowd’s new long-playing record required ropes and planks – for the gallows on which its reveries are hanged; for the mast before which its visions sail free. Fever Ship is a rich, novelistic collection of 10 songs. These evocative tunes trawl across centuries for hangmen, cursed lovers, the sick and condemned, the fleeing and flayed, two crows feasting on corpses in a ditch. Horslips drummer and writer Eamon Carr crafted the lyrics which fathom uncharted dark waters under which lurk sinning souls in damp swirls of adversity. Up on deck and lashed to the wheel, spotlit by St Elmo’s fire, cult singer Dowd steers this idea-bursting vessel into the eye of the storm, its battened-down hatches jumping with Carr’s tales of bones and floods, sins and penitence, and ointment from the Orient.
Chained up in the Fever Ship hold is the resurrected Horslips Cú Chulainn. Huddling and flogged, he has returned as a refugee in the turbulent current of today’s cruel sea. Dowd breathes new life into The Táin 1973 classic, with two original Horslips veterans pressganged into his crew: Jim Lockhart adds flute, whistle and Hammond organ while Eamon Carr’s drums whip the classic lament into new St Vitus’s dance.
On The Merchants of Bordeaux, Dowd delivers a tale of defiant Wild Geese migrants bound for the vineyards of western France: “We were carried/On a crimson tide/Over fields that once were green…We were ragged/We were broken/The most wretched ever seen.” For the chorus, his thirsty backing singers abandon ideas of mutiny to join in: “So tonight/Let’s salute that call/And let your spirits flow/We’ll raise a glass and call a toast/To the merchants of Bordeaux.”
Dowd’s deft guitar and raw emotional voice plot the course, as the deckhands play magical gliding violins, epic accordion, keyboards and slide guitar. His melodies unfurl and the whole vessel sails on with its cast of lonely cranes, hungry crows and Wild Geese. Along the way, Carr puts down his fountain pen at the ship’s log to return to the drums, hammering them on Cry on My Grave as though banging nails into planks come loose up on deck.
A song collection of novelistic scale, Fever Ship is the latest milestone for Eamonn Dowd since 2017’s feted Dig Into Nowhere. Eamon Carr’s deep evocative lyrics provide the slipway rails on which Dowd launches these tightly woven melodies and perfectly judged musicianship. His crystal-clear voice arrests you with its character and conversational charm – there is brilliance and perfection in his interpretations of Eamon Carr’s mature poetry of dislocation and memory. Drawing on history with empathy, this is a literary rock album that applauds struggle and survival and human triumph over the odds that could sink you. Eighteen months in the making, Fever Ship proves to be a perfect vehicle for musical collaboration between Eamonn Dowd and Eamon Carr, two idiosyncratic titans of Irish rock.

"This is old-school arts and crafts, a terse articulation of the devil’s music, of struggle and calamity, of strangers in dangerous towns. Eamonn's music matters"
- John Fleming - The Irish Times

Bandcamp Daily  your guide to the world of Bandcamp

Damu The Fudgemunk shares his recent collab with Def Pressé, plus jams from Common and more